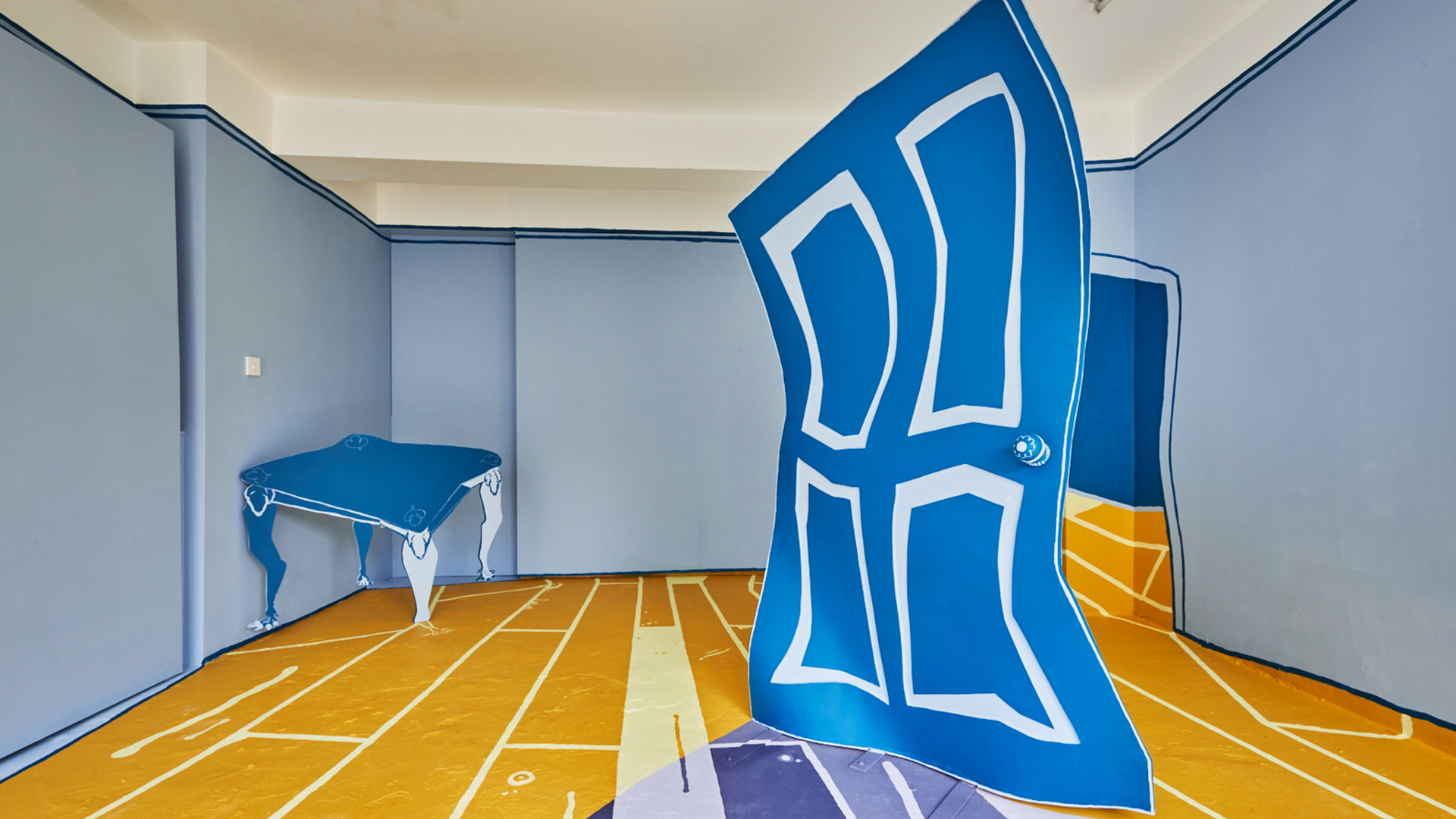 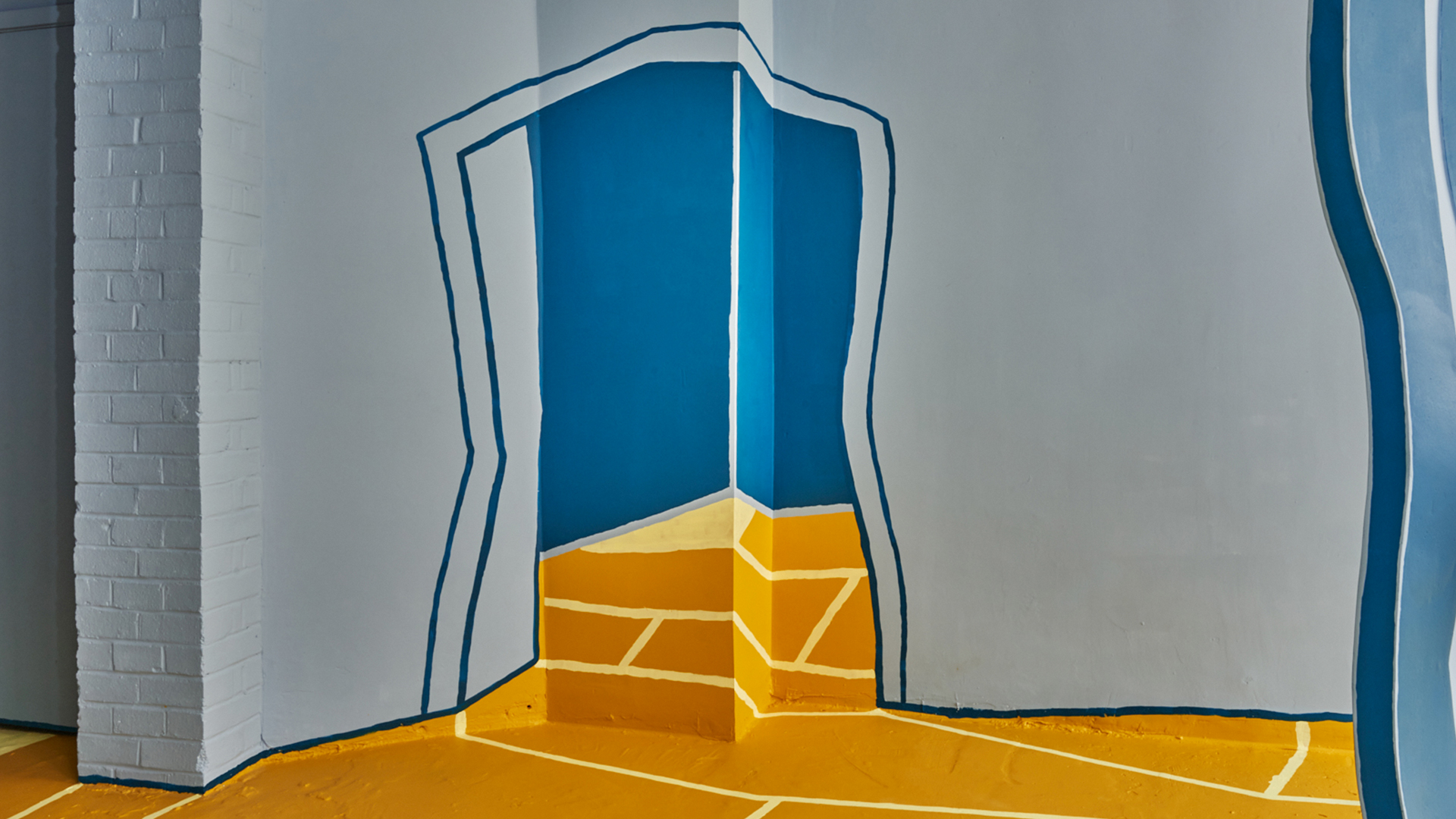 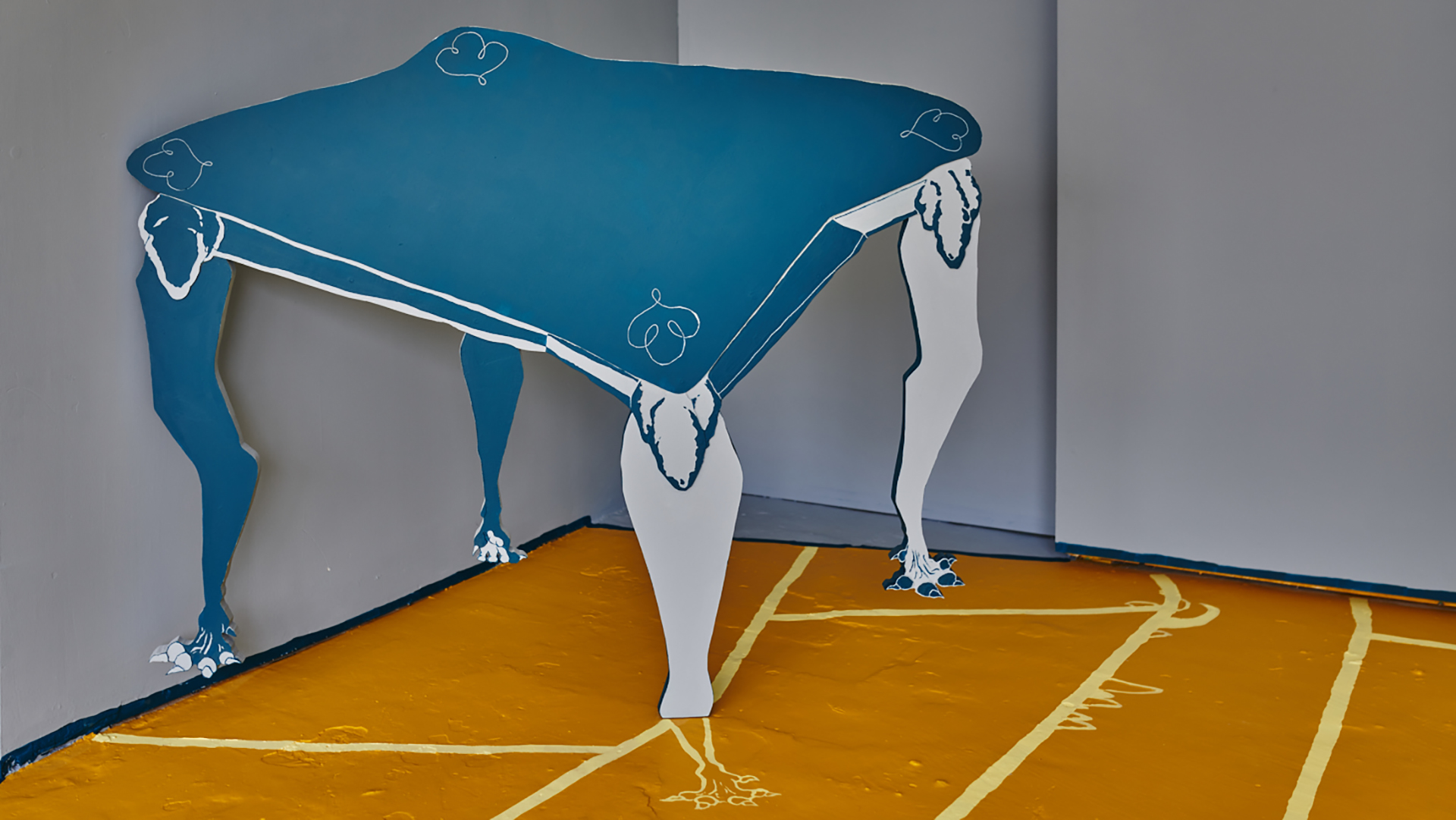 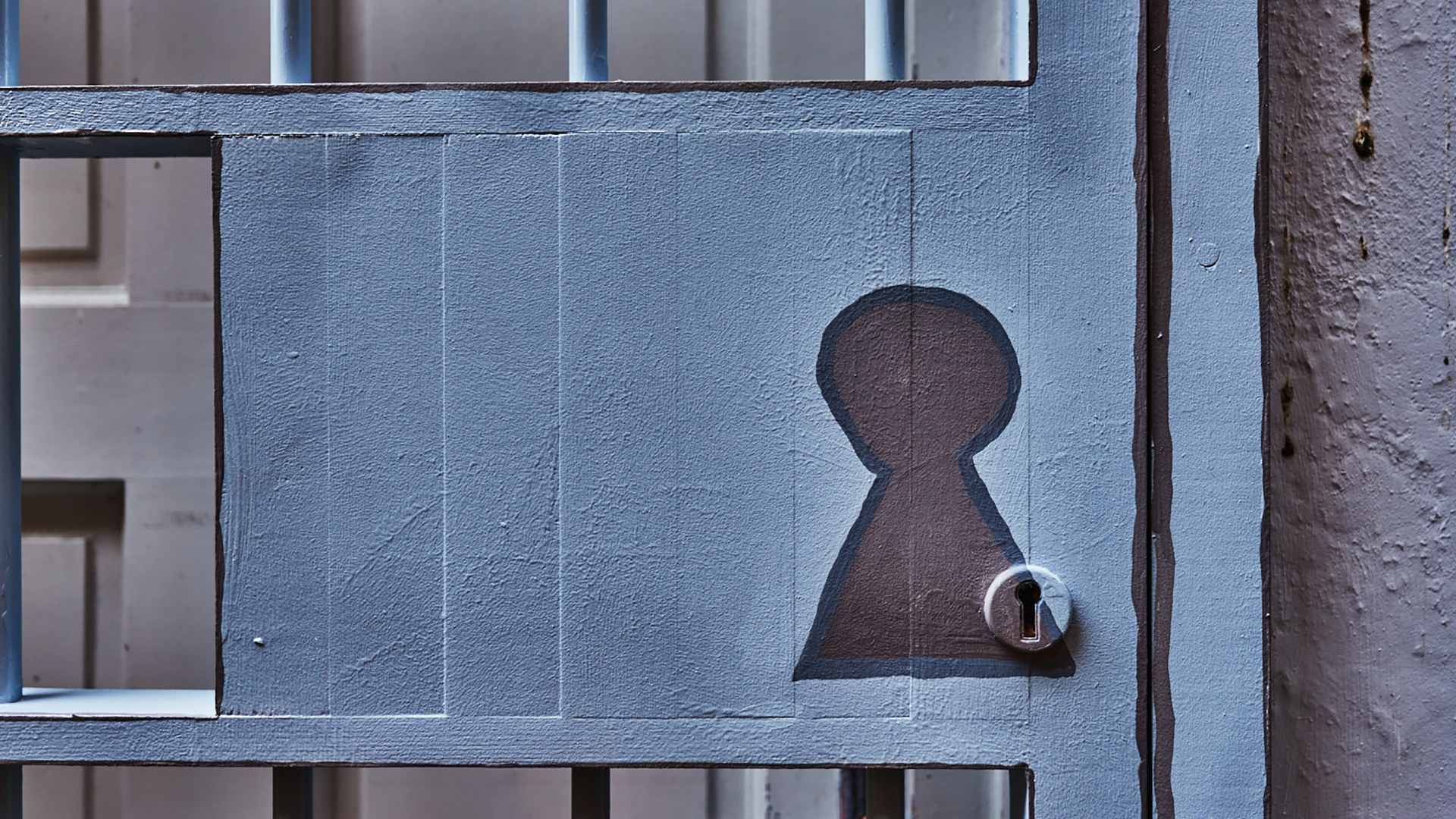 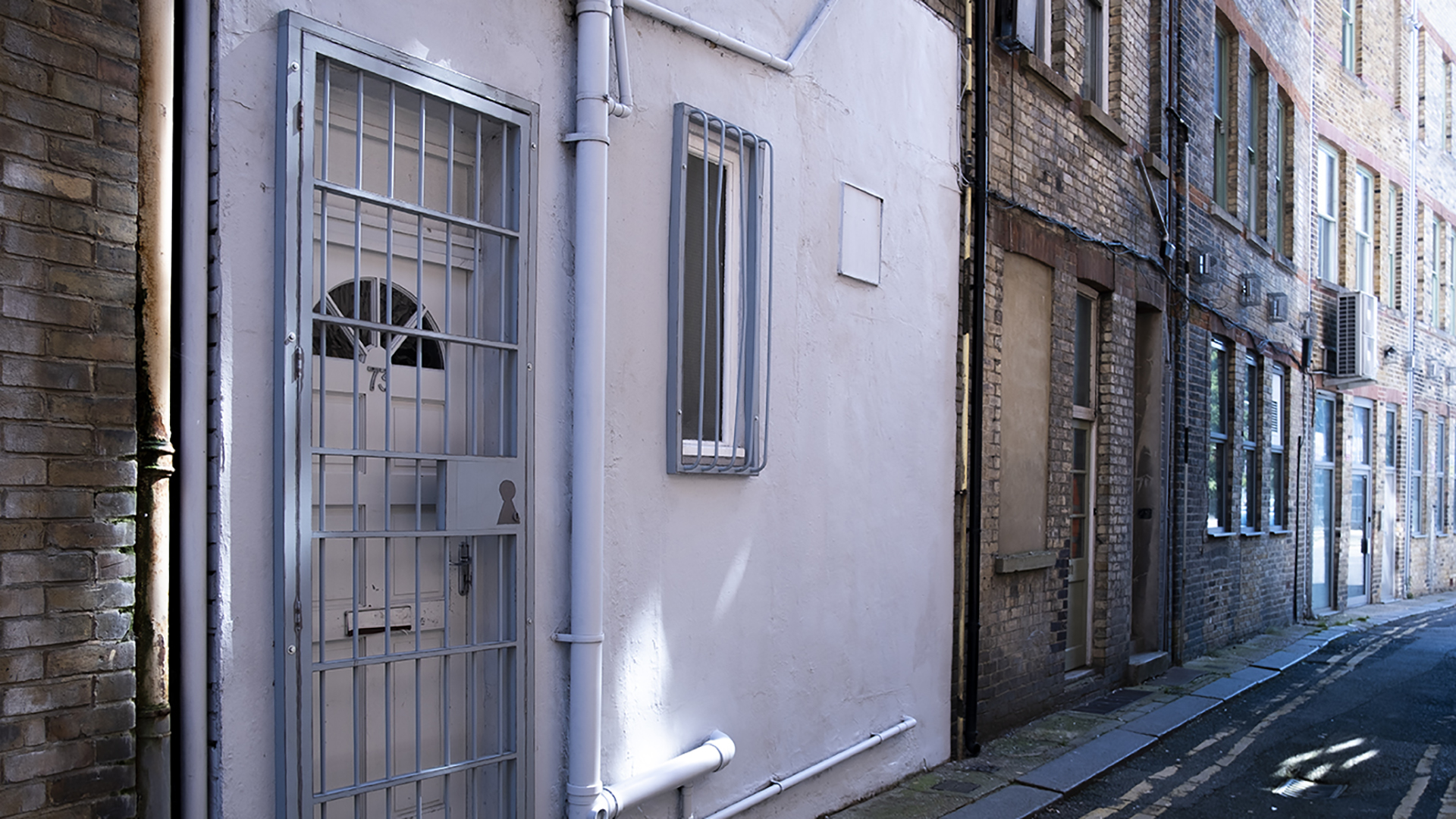 Site-specific installations inside the gallery + rear building façade on Mill Bay
#surfacetensions2020 #sitespecificinstallation #artunderlockdown #ST20
‘Soft Rupture’ is a fully immersive site-specific installation that takes over both the inside and outside CT20’s project space. Spaces are exaggerated through forced perspective,  interrupting the gallery’s existing architecture through inflated forms, colour and trompe-l’œil.

Juxtaposing static sculpture and the fluid, chewing gum physics of the Golden Age of Cartoon, ‘Soft Rupture’ is animation in freeze-frame. It creates a forever-in-stasis diorama where familiar, household forms are skewed in this stage set and everyday architecture is injected with anthropomorphic gestures. These gestures animate the objects with emotion, transporting them into the foreground. As viewers, we enter the space of the furniture sculptures and exist amongst them, becoming background figures in their story.

Exploring issues of mental health and sensuality through the queer perspective, the world Pooler creates speaks of millennial ennui and anxiety through sculptural performance. These sculptures explore feelings of uncertainty, dejection and confusion experienced through the seemingly never-ending process of learning, life lessons, growing up and the transition into adulthood.

Exploring issues of mental health and sensuality through the queer perspective, Ned Pooler’s practice is rooted in the experiences of learning, life lessons, growing up and the transition into adulthood. The world he creates manifests ‘millennial’ feelings of dejection, alienation, fatigue and horniness; using gestures as a vehicle to speak of emotional angst.⁠
Surface Tensions 2020 presents art that is deeply immersed in the traumas, struggles and violence of our time, from the perspectives of those on the margins, subverting established powers and narratives in a collective act of creative resistance, and questioning our relationships to Western identity and nationalism.

Constructing a locus of instability and finding fortitude in the perpetual struggle between the inner and outer worlds, ’Contra Culture’ goes against the grain and defies the reactionary logic that exploits uncertainty and anxiety. Navigating the darker recesses of the human psyche against the bifurcating psychosis that permeates the global brain, when art is turning digital, it celebrates physical and material expressions as counterintuitive forms of resistance.

Experience the immersive nature of Ned Pooler’s ‘Soft Rupture’ by revisiting the installation in digital form on Vimeo.