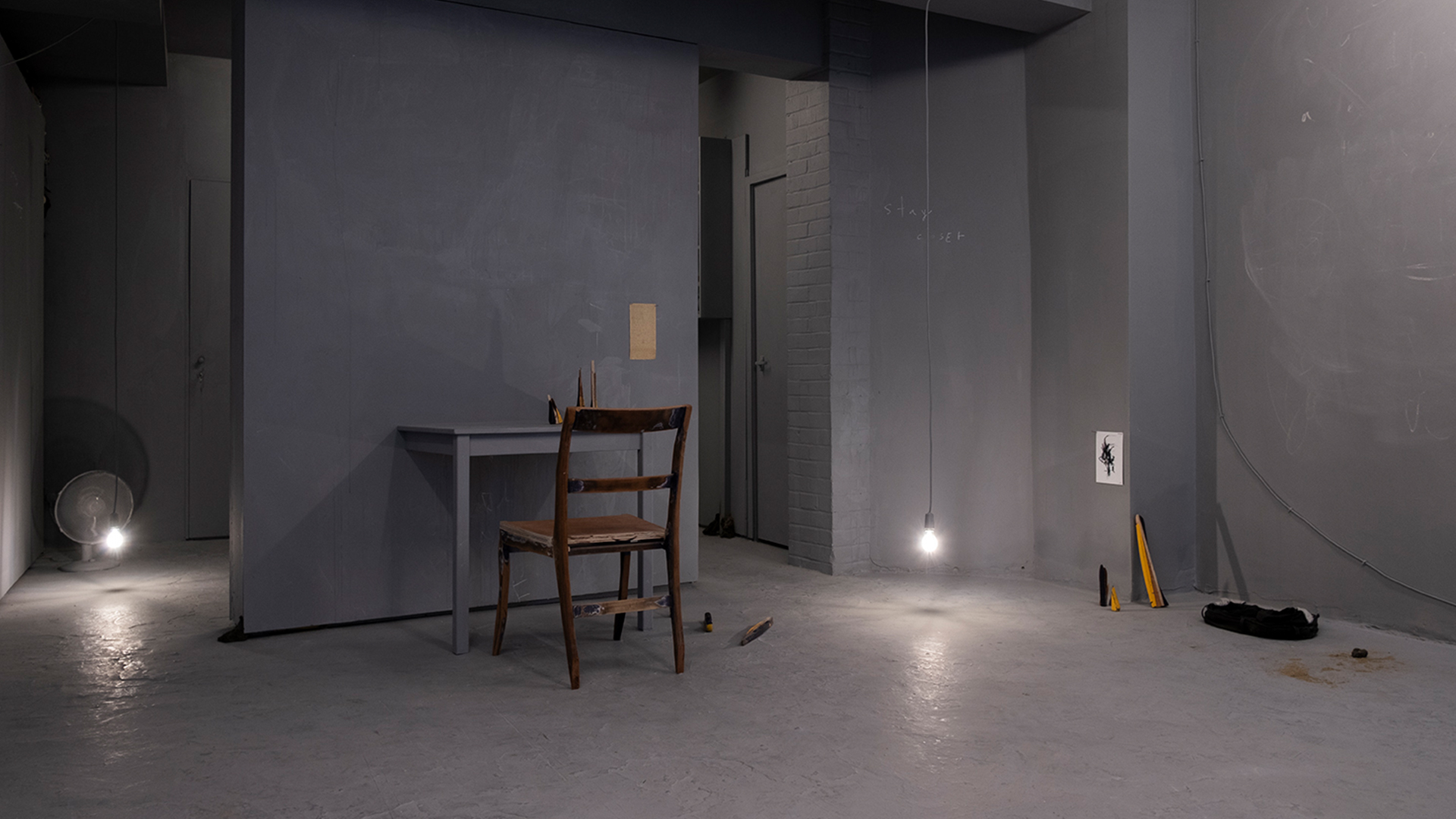 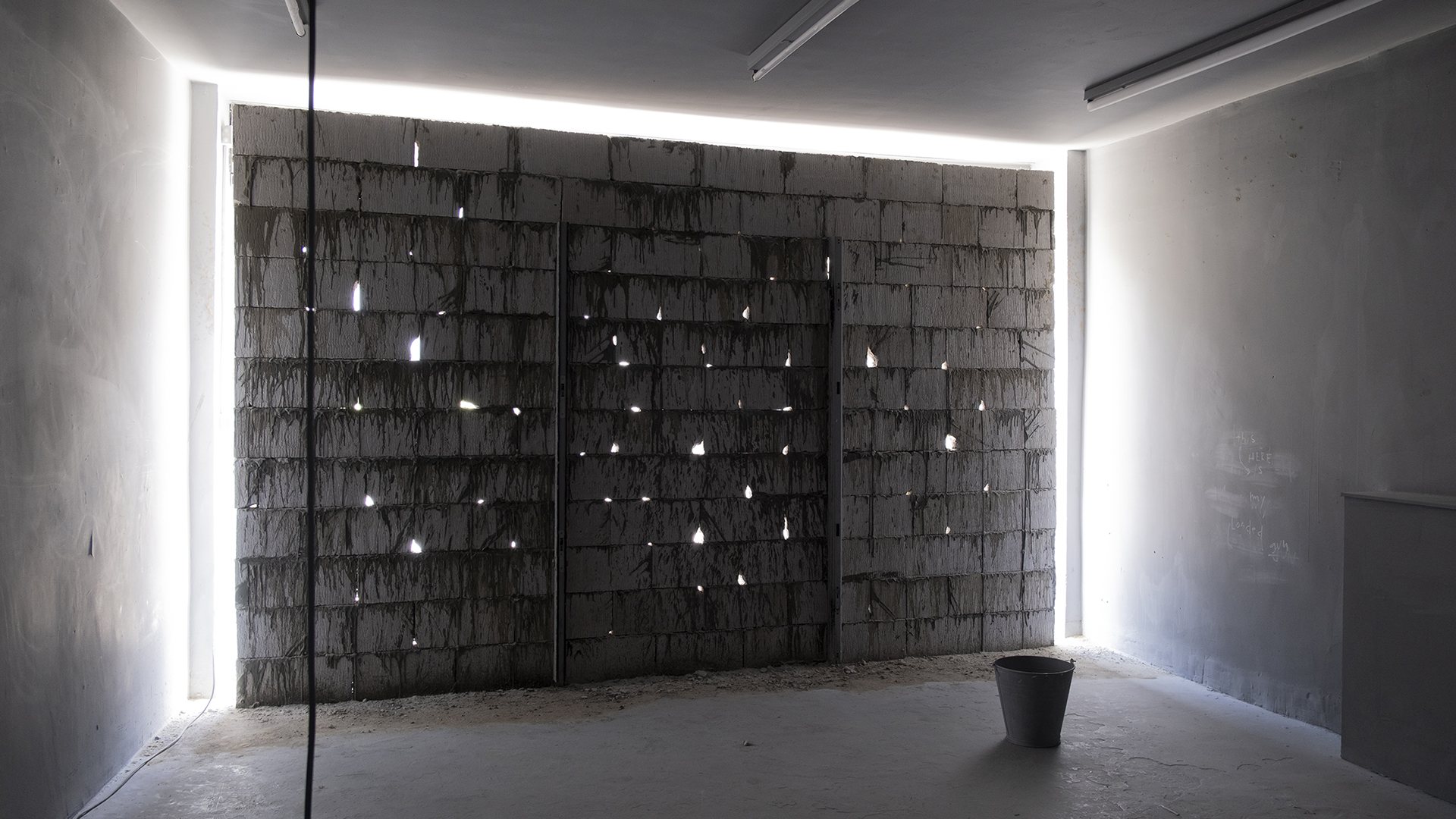 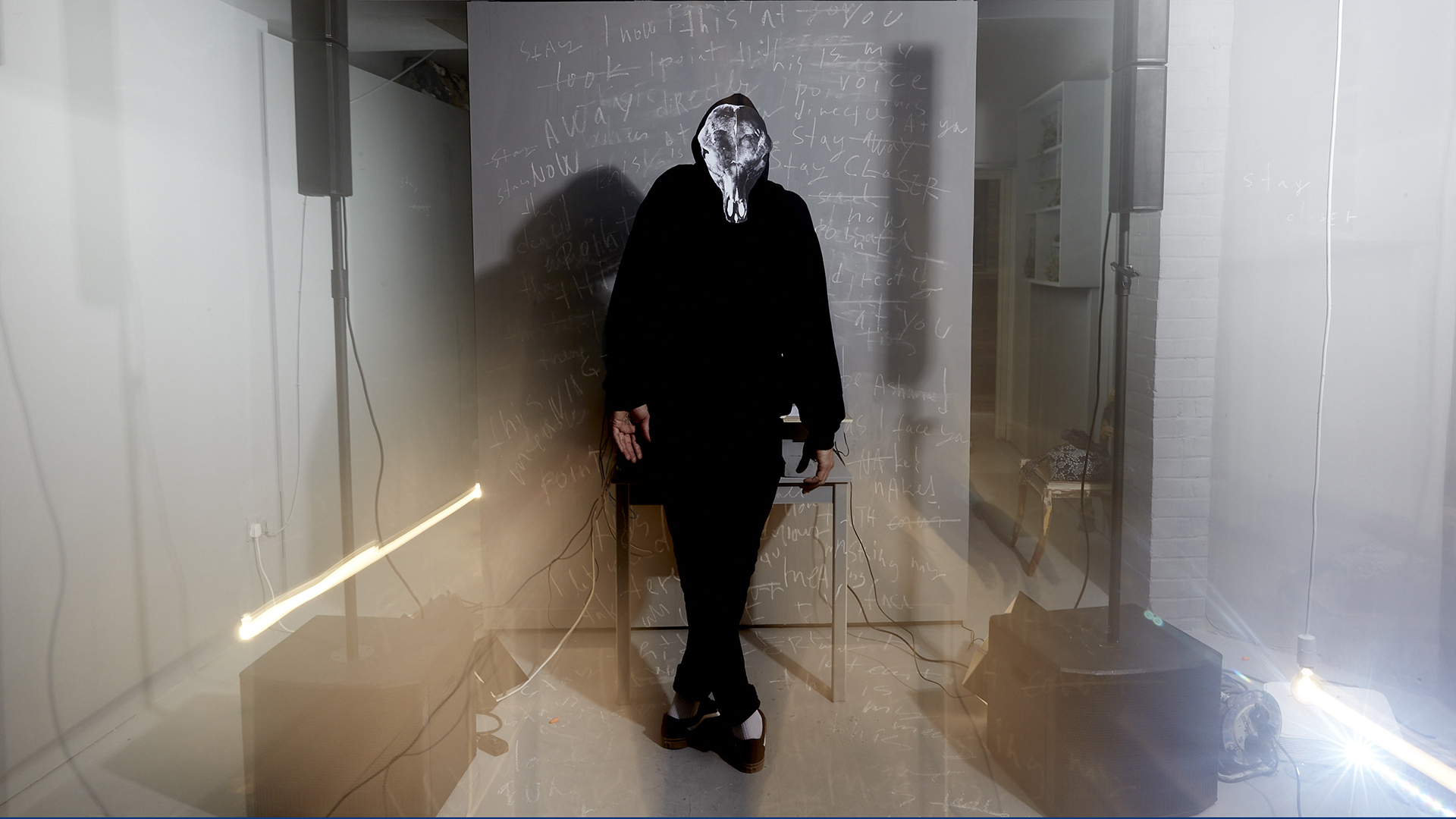 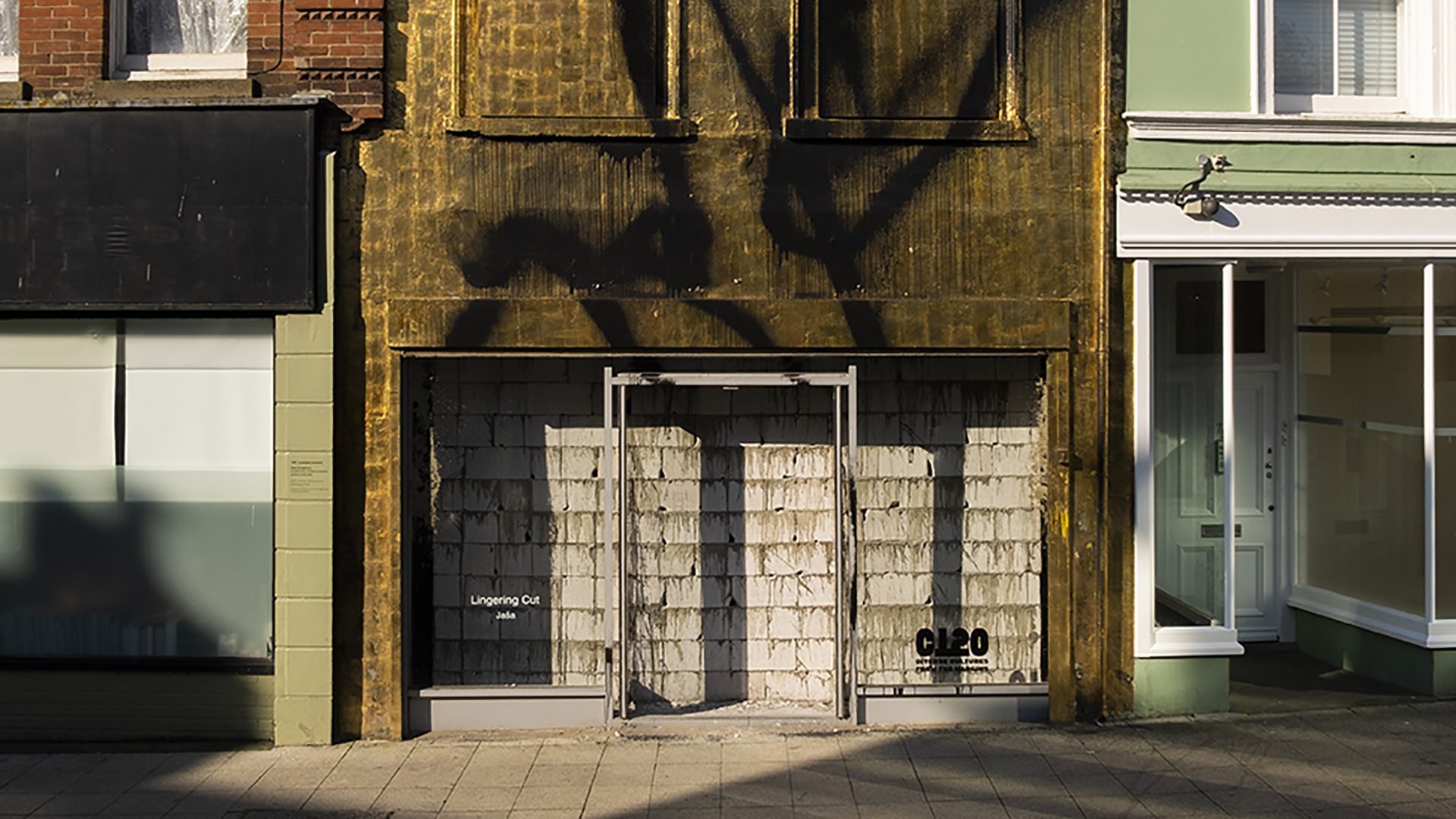 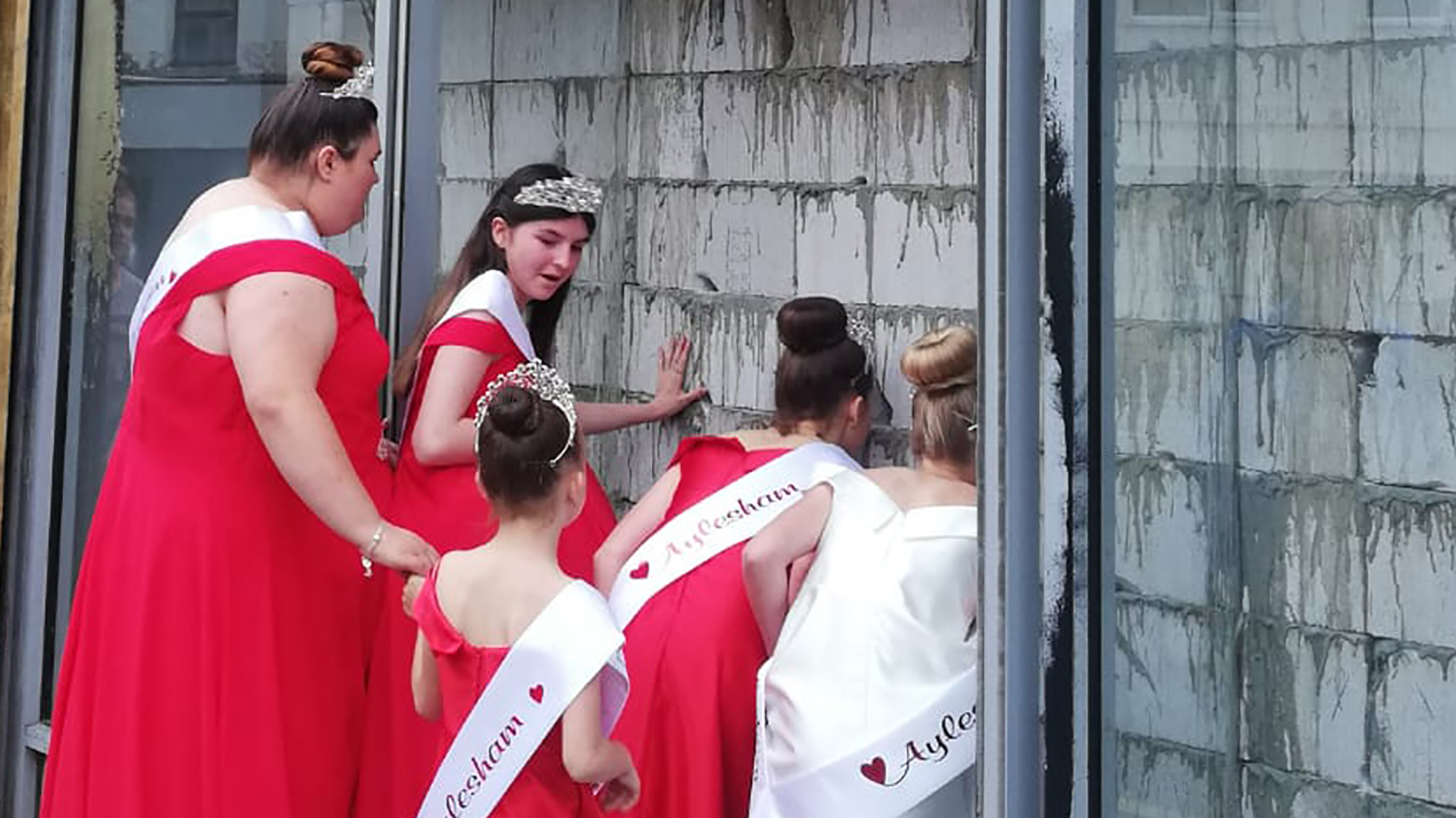 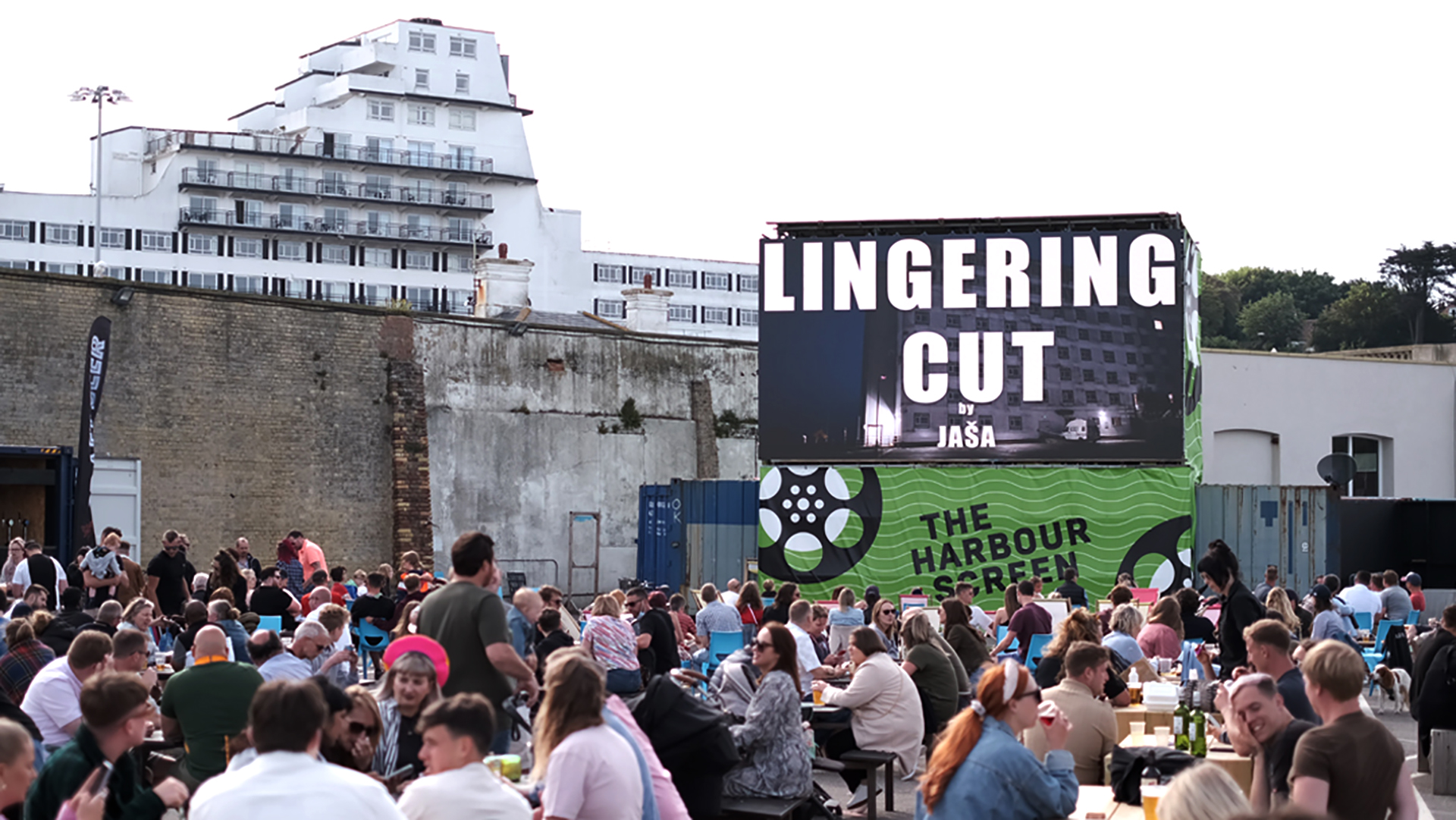 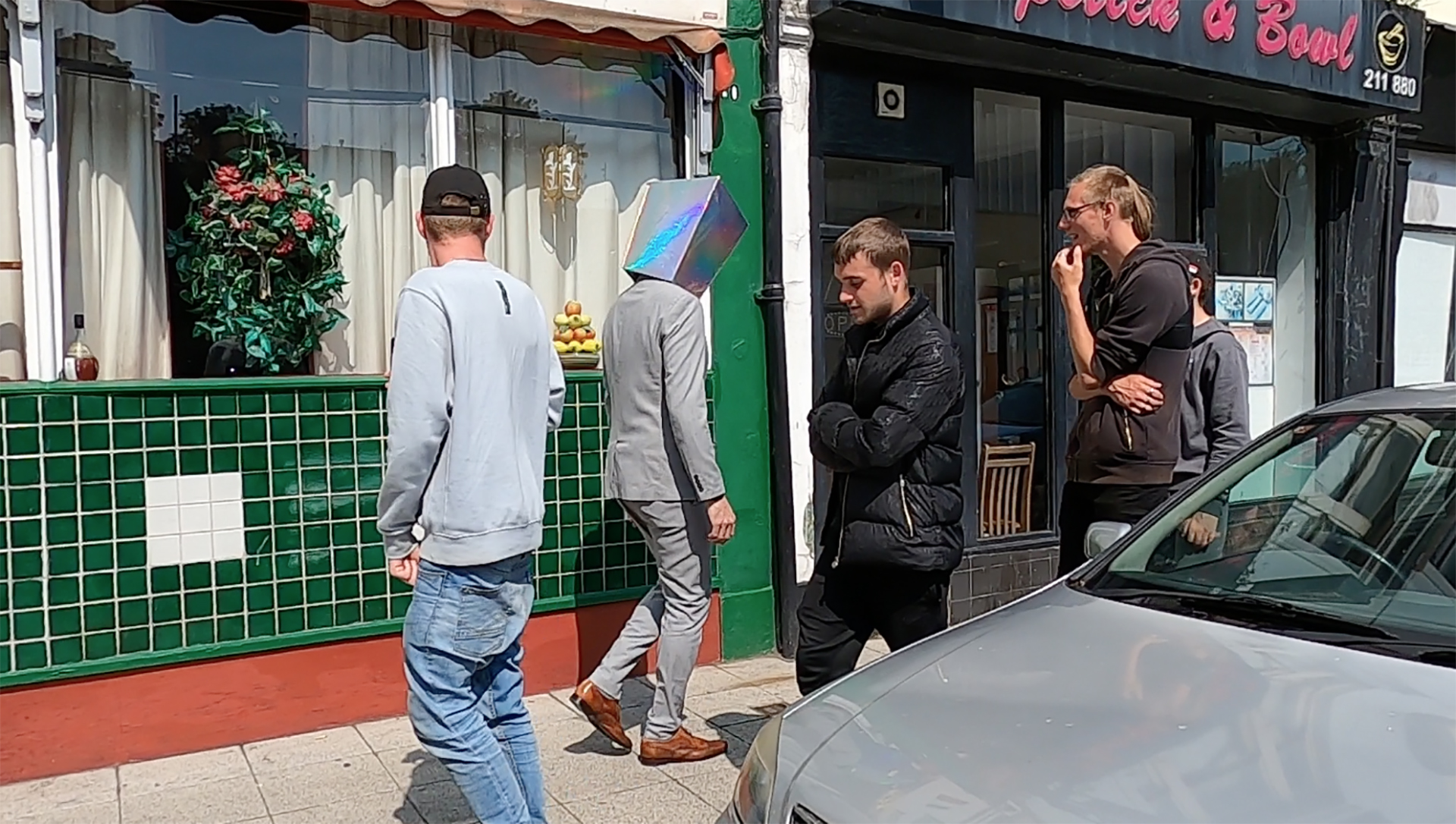 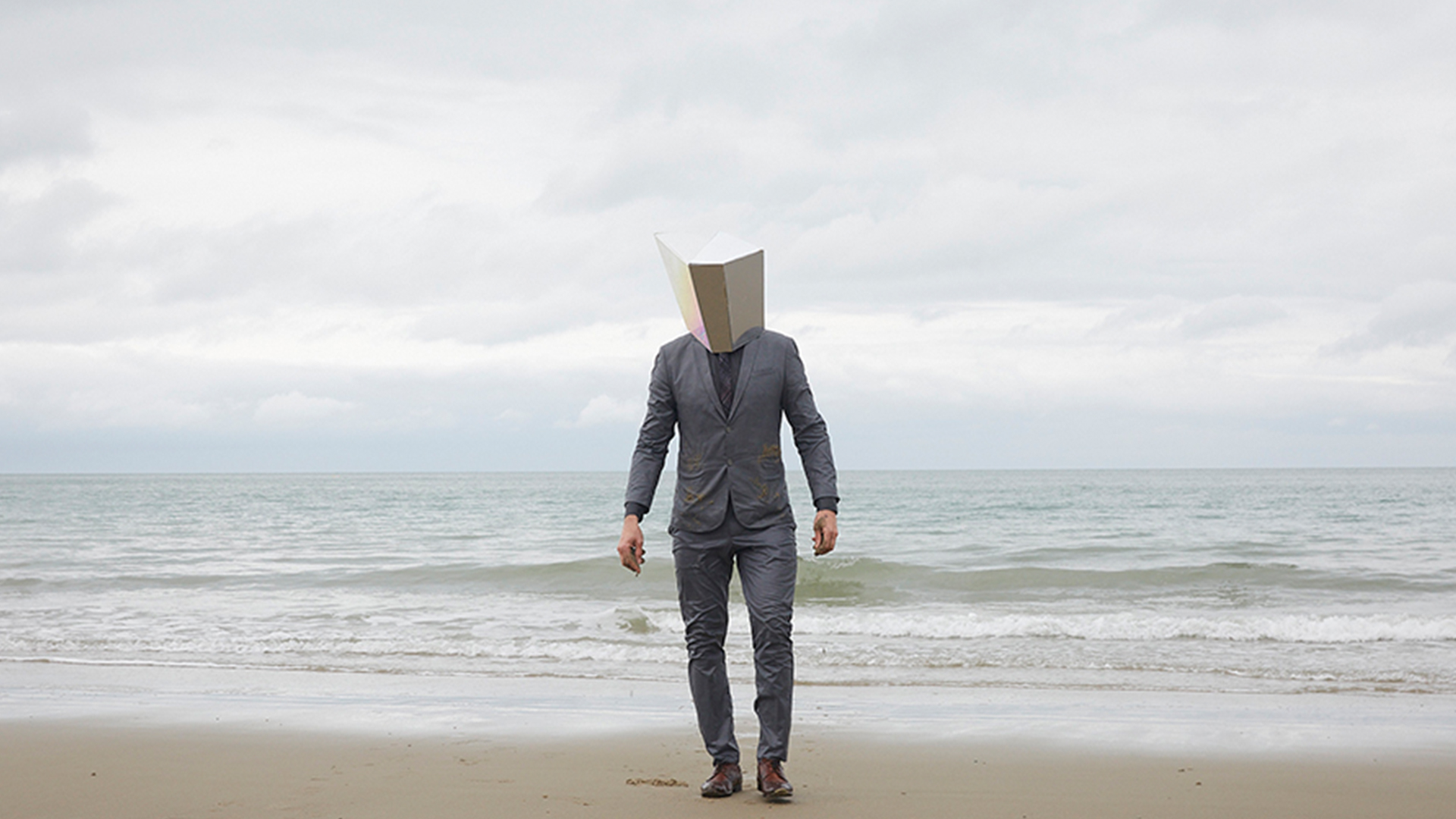 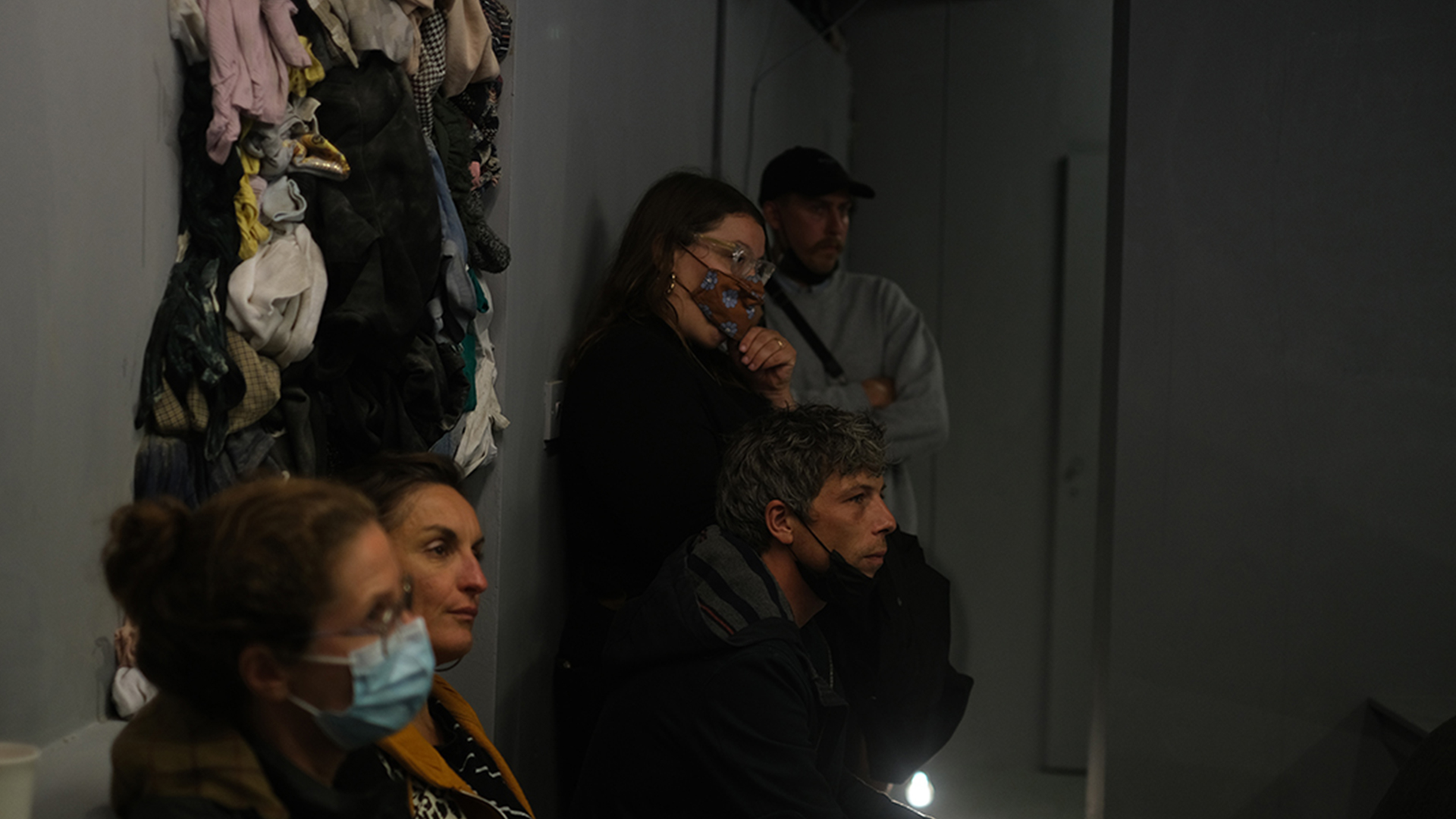 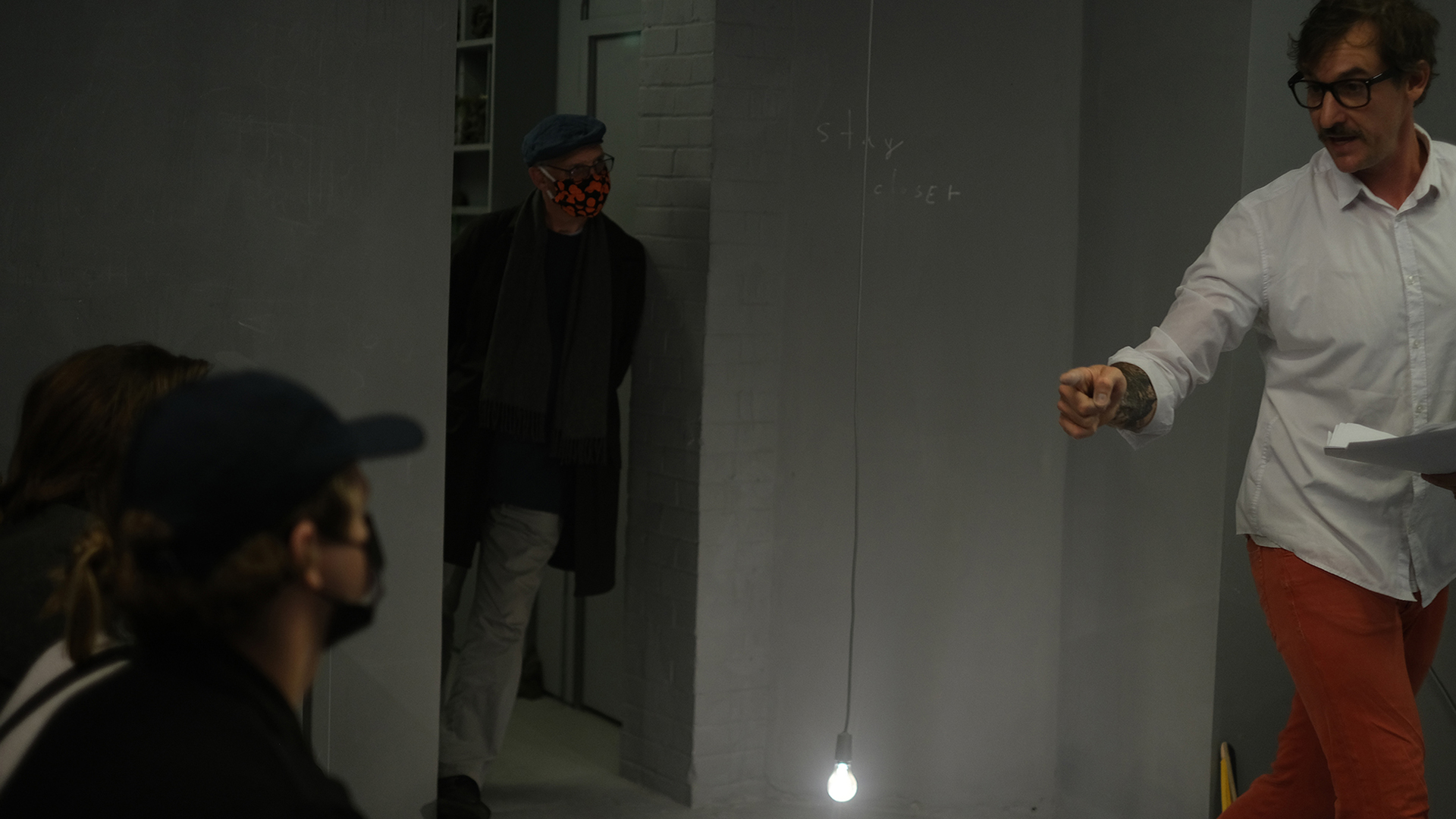 Installation opens to the public from:

‘During the initial stages of the COVID19 lockdown in May 2020 an older idea resurfaced as the challenges of thinking, planning or even producing collaborative non-studio artworks or projects of any kind became almost unsurpassable. An idea of a collective action turned into a situation of solitude and detachment, a reality that only needed to be documented and not staged. The video was shot somewhere and then sent elsewhere. An older line came back chasing me: “A wish? A disaster.” Somewhere within the voids and cacophony of overlaying thoughts and needs of one, a persisting solitude takes vengeance on the outside world. An egoistic projection (resonating a string of dominant political ideas) brings the crumbling reality of solitude to everyone else too.’ [Jaša]

‘Lingering Cut’ is a complex, multi-dimensional and multi-layered body of work that unfolds over time. It consists of moving images, site-specific installations, durational and light & amp sound performances, as well as performative artist lectures that took place at CT20’s Project space as well as the Harbour Arm in Folkestone.

Since his first intervention and performance at CT20 in 2017, Jaša’s work bracketed a period of social upheaval and the surge of far-right politics in the West. After the horrors of social distancing and months of isolation due to the pandemic, we re-emerge into a fractured world in which oppressive political alliances have tightened their grips on power. Jaša’s poetic gestures point to the realities in his home country in Slovenia and the urgency of creative resistance, more so than ever. As JAŠA explains,

“The elements of the story have been spreading out like rooms of a memory palace. Now they are taking shape in real life. The result will be a Munch-like scream within the new normalities of the (post)-COVID societies and menacing options of post-Trump politics in Europe. An expression of a voice that says: ‘we will all join the club of the silently screaming, our minds will melt into one loud cry of pure angst.’ This will be integrated through the use of various media as ‘interventions,’ as I like to call them. All of it, the reality, is still made of the same fabric, but something inevitably and undoubtedly has changed under the surface.”

Daily performance inside 73 Tontine St, Folkestone (viewable from the street)

‘The Revolt of One’, Artist Lecture, 73 Tontine St (Mill Bay entrance), Folkestone (an intimate evening with the artist)

Jaša (Mrevlje-Pollak) was born in Ljubljana in 1978. He studied at the Accademia di Belle Arti in Venice and has since been a unique presence in Europe’s artistic landscape. One of Slovenia’s most prolific and critically recognized contemporary artists, Jaša is driven by his rhapsodic interpretations of situation, narrative, sculpture and performance. Through his alchemistic connection with material and content, Jaša transforms spaces into experiences, driving them toward their poetic and aesthetic potentials. Pushing artistic boundaries through uncompromising vision for almost two decades, Jaša has created a rich and remarkable body of work that includes multiple critically acclaimed solo shows and projects in Europe and the US. In his two active studios in New York and Ljubljana, Slovenia, Jaša has created a unique environment, which allows him to cultivate contextual and visual eventuality integral to his work.
Surface Tensions 2020 presents art that is deeply immersed in the traumas, struggles and violence of our time, from the perspectives of those on the margins, subverting established powers and narratives in a collective act of creative resistance, and questioning our relationships to Western identity and nationalism.

Constructing a locus of instability and finding fortitude in the perpetual struggle between the inner and outer worlds, ’Contra Culture’ goes against the grain and defies the reactionary logic that exploits uncertainty and anxiety. Navigating the darker recesses of the human psyche against the bifurcating psychosis that permeates the global brain, when art is turning digital, it celebrates physical and material expressions as counterintuitive forms of resistance.

In this review, Howell reflects on Ljubljana-born artist Jaša’s performance piece as part of, ‘Lingering Cut’, and it’s power to communicate feelings of frustration and confusion in a fractured time.