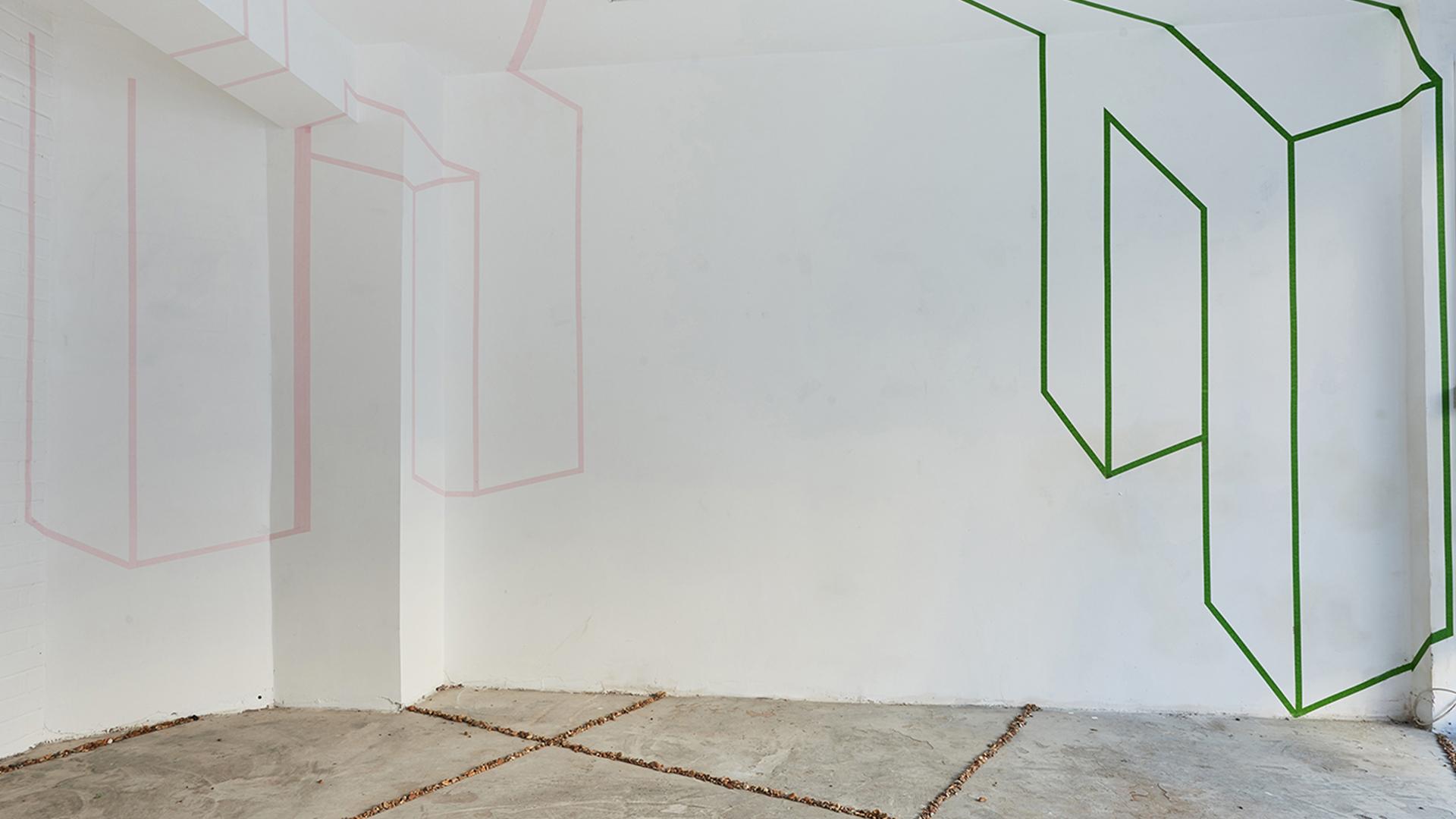 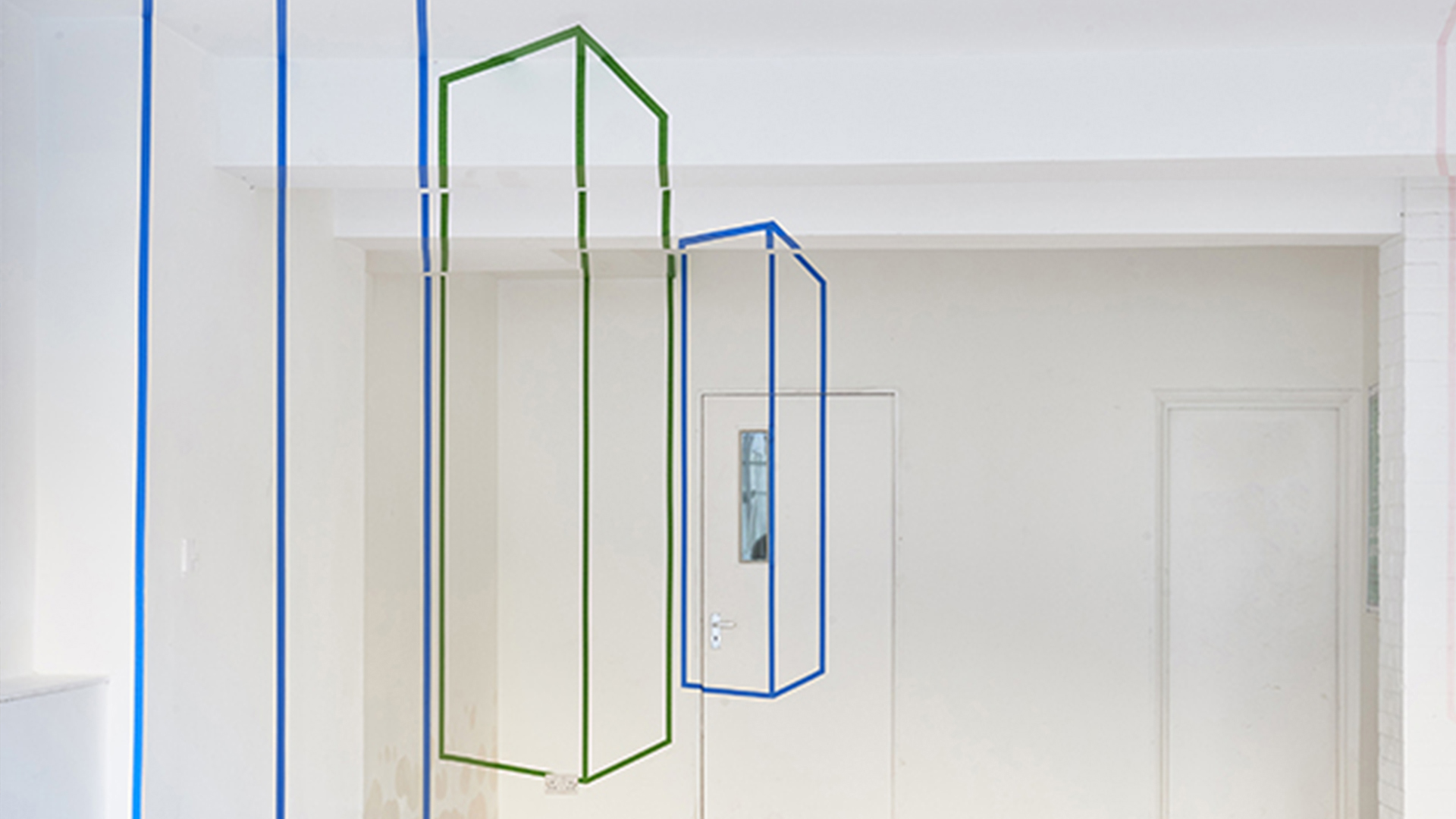 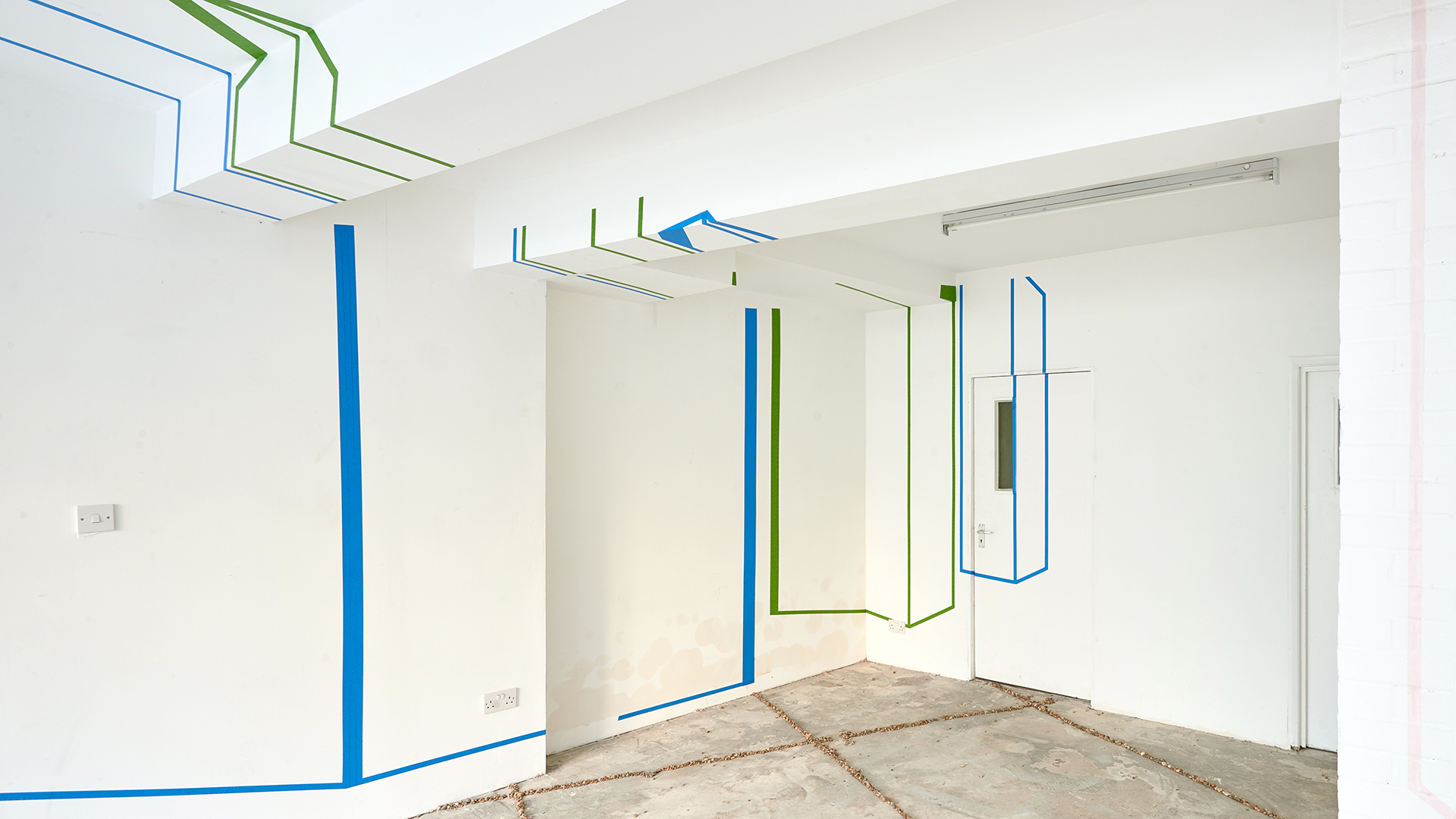 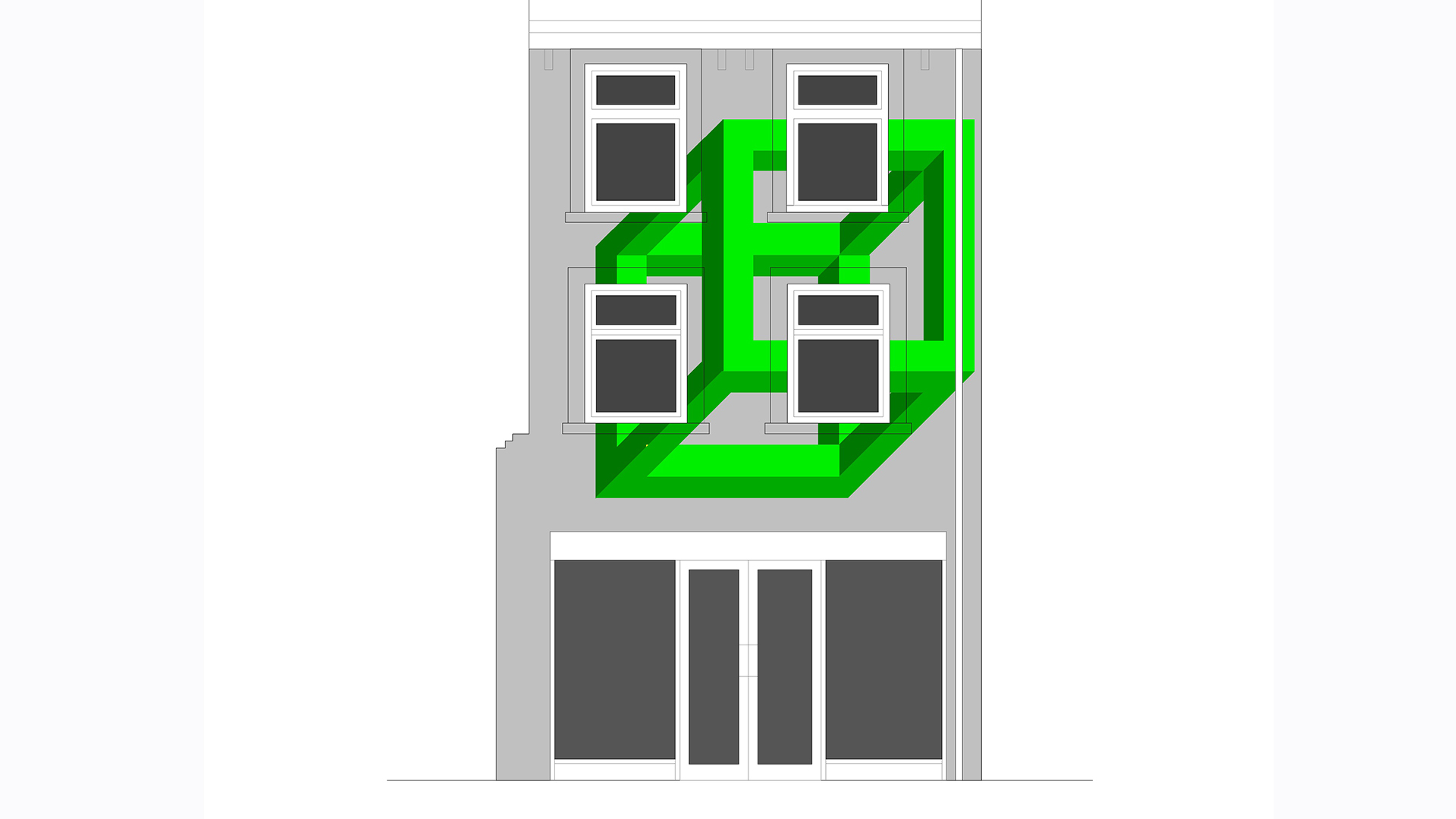 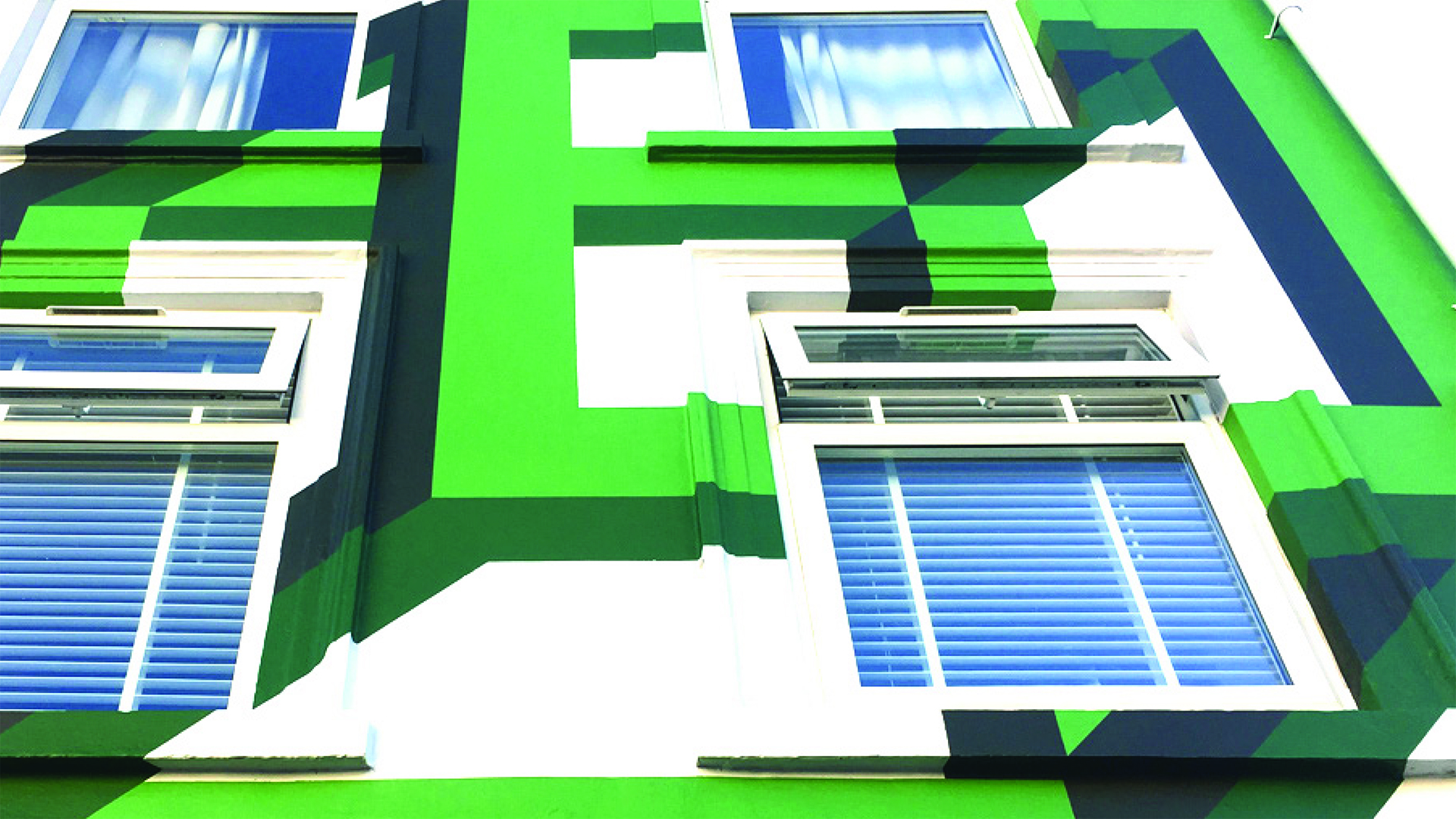 #surfacetensions2017 #surfacetensions #sitespecificinstallation
‘Levitations I+II’ comprises two architecturally scaled painting projects by Sean Griffiths. The works formed a permanent fixture on the front façade of the building in Tontine Street, complemented by a temporary work painted onto the internal walls of the ground floor gallery. Reflecting the artist’s interest in the relationships between the realities of three-dimensional time and space, and the problem of its two-dimensional representation, the paintings used different types of mathematical projection to create levitating representations of objects that oscillated between stasis and movement, coherence and discontinuity.

Levitation I presented an idealised cubic form projected in Euclidean geometry, interacting with the “imperfect” geometries present in the existing façade.

Levitation II used anamorphic projection techniques to create a series of apparently random shapes and coloured forms which – when viewed from specific positions within the gallery and from the street – coalesced into coherent geometrical forms as the viewer moved past and around them.

Levitations I + II was first and the last in a series of 4 site-specific installations and performances commissioned by CT20 for ‘Surface Tensions 2017’ to mark the launch of its new project space in Folkestone.

Sean Griffiths is an artist and architect. He was a co-founder of the art/architecture practice, FAT (1991-2014) and has practiced individually since 2014. His work is concerned with the relationships between spatial realities and the inadequacies of their representations. In particular he is interested in the nature of the line as something drawn or as something existing in real space and how the one becomes the other. These ideas have been explored in a number of recent gallery based site-specific installations and architectural works.

Sean has exhibited his work nationally and internationally at venues including, the South Bank Centre, the Victoria and Albert Museum, the Carnegie Museum of Art, Pittsburgh, the Walker Art Center, Minneapolis and Stroom, The Hague. His practice FAT represented the UK at the 2014 Venice Architecture Biennale.

Walking between architecture, art, music and performance,CT20 presents a cross-generational and multidisciplinary group of artists in a dynamic series of site-specific installations to mark the launch of an ambitious new platform in Folkestone.