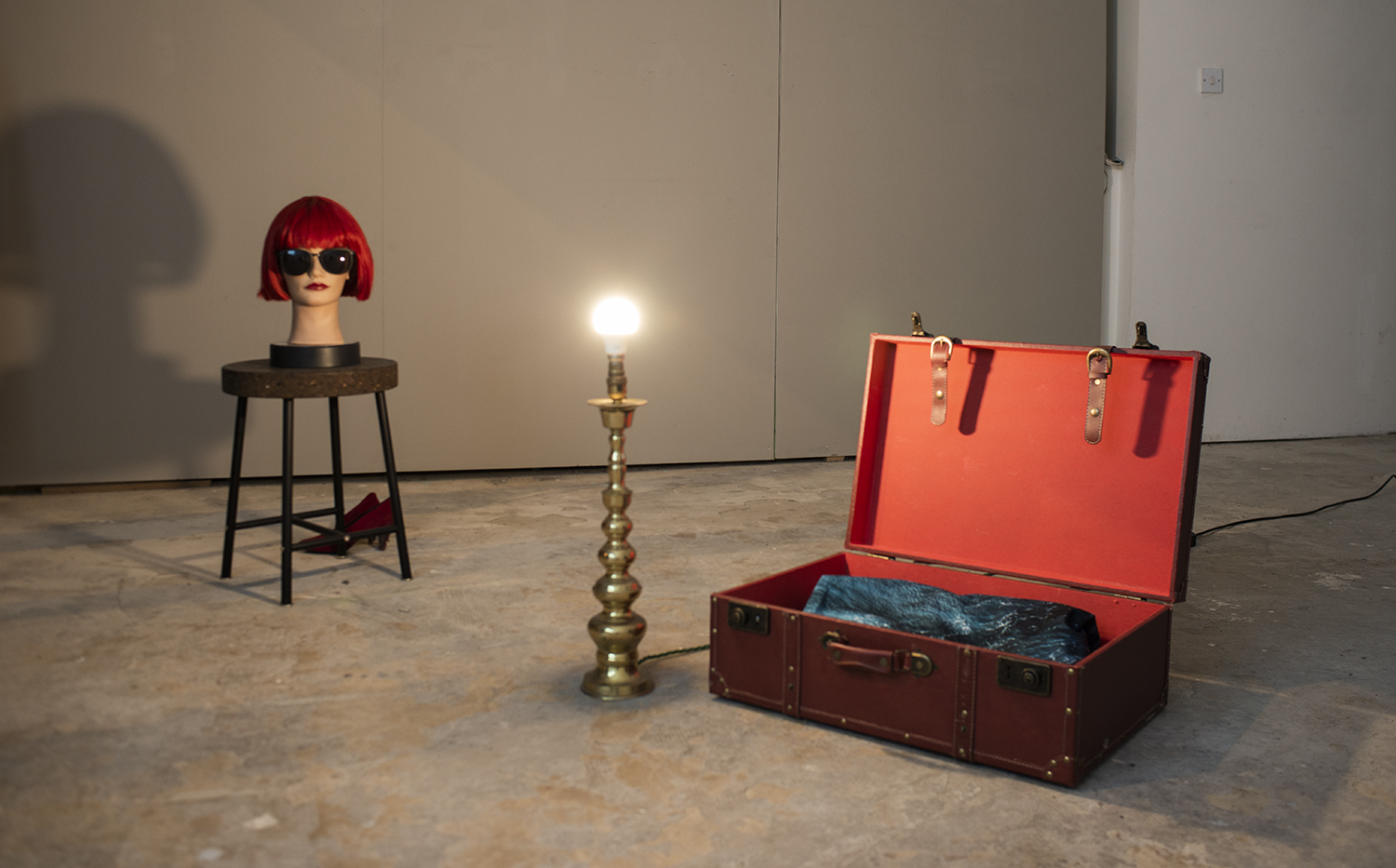 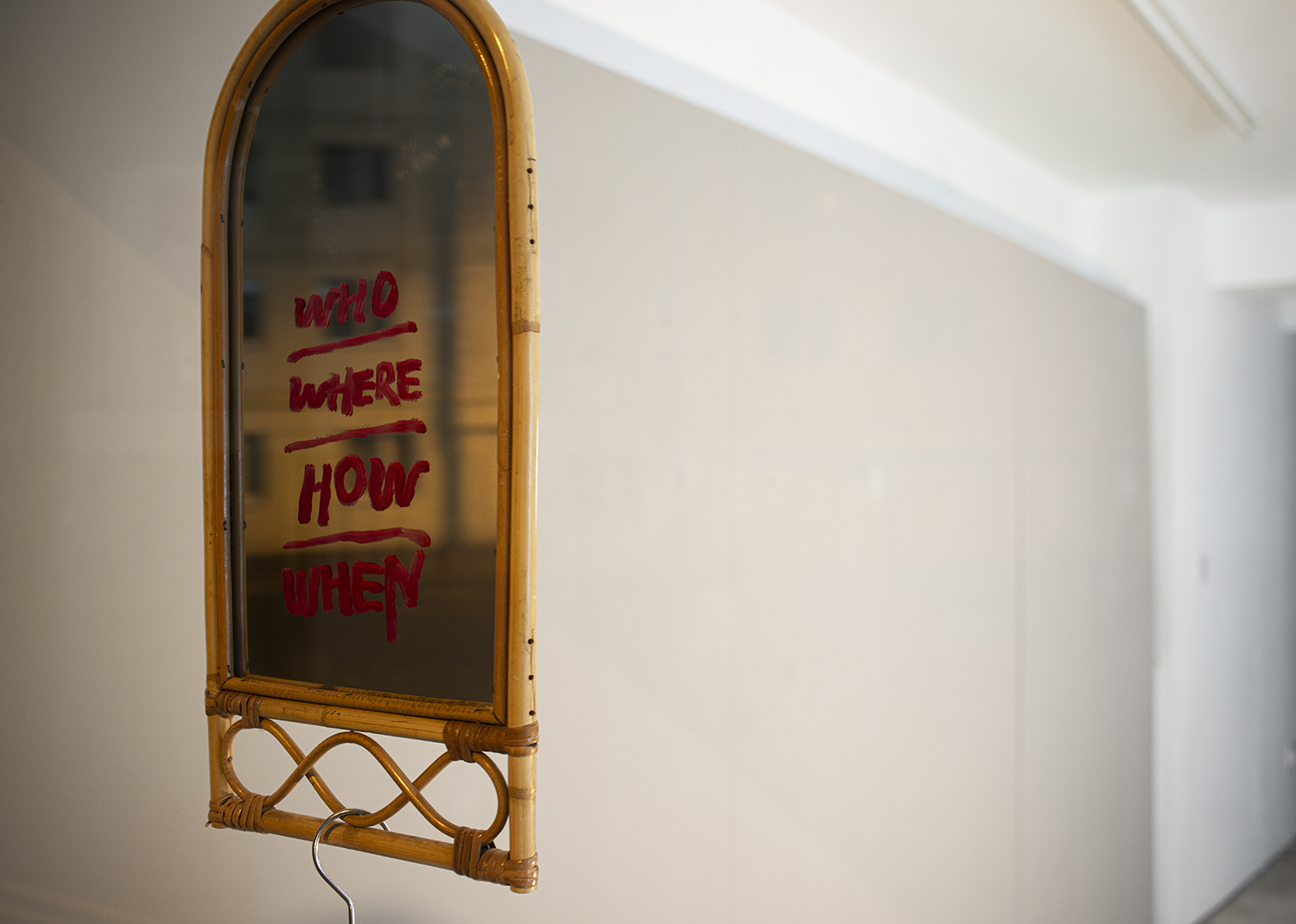 In this essay, Franklin reflects on the latest window installation by the Macao-based artist, Hio Lam Lei and how it relates to her own personal perspectives during the COVID19 pandemic.

In March, Hio Lam Lei originally set out to begin her residency at HOP Projects CT20, from Macau (China). Ahead of her arrival, Folkestone got ready to once again sprawl out onto the streets of Tontine Street as the April evening sun warmed us, reminiscent of HOP’s events (Prescient Pool) last year. Instead, Hio travelled to meet an “eerily deserted Creative Quarter” and a forecast of fractured meetings, arrival secrecy and a bleak potential of a place without its people – a setup like that of many other galleries where being able to stand, stare, ponder and drink with art can now only be part of a romanticised past. The world has never been more conscious of time – in the past, present & future tense. It feels morally necessary to question when would have been the “right” time to act, as you sigh amid new year hopes that 2020 was going to be your year, and as we play with a dystopian vocabulary for the outside…we stay inside and fantasise.

I have never felt more aware of the privilege that I have from being able to reflect, weaved through an assumption that ‘home’ is the safest place to be. And for me, this is true. The body stays put as the mind takes its freedom with better times to come, whilst ‘outside’ bodies are forced to become the biopolitical subjects of our time through a war-like effort, underdog story-telling and a bitterly long-overdue recognition. ‘The fight against this invisible enemy’ has to be played out over the ‘level of life’ itself, and, as Foucalt described in Society Must Be Defended, ‘[i]t was a type of power that presupposed a closely meshed grid of material coercions rather than the physical existence of a sovereign’. Such ‘material’ bodies, those who look after others, now make up this show of key workers under a delayed tale of national heroism.

I thought it was important to shake off my feelings on paper as we all should, as for the first time (speaking from a Western perspective), partners such as the mind and body, outside and inside, exterior and interior, seen and unseen, public and private, meet and depart in constant evaluation of one another as one feels a hyper – awareness in relocating the body in thinking where and where not to place it to avoid judgement or lesser value. When we throw art and the limited / remote ways we can engage with it into the mix here, it can almost be realised and emphasised with more. In finding Hio’s work to be a vessel in channelling this, Surface Tensions (ST20) seeking to present art that is deeply immersed in the traumas, struggles and violence of our time from the perspectives of those on the margins – feels timely. As the ‘physical’ world stops for people like me, the work can not only provoke what this pandemic highlights, yet align the viewer with Hio’s experiences with how the material, seen body needs to move within discourse in order to be accepted in society, be recognised, and to survive. In this theatrical stunt, it has taken the world to toy with life and death and be forced to look in on itself, for capitalism to break, for the environment to temporarily heal… to let the privileged feel disorientated.

… “Time is what determines the limits of all art”

As an artist working with moving-image and sculpture, having to interpret these mediums from prescribed time is telling; whether that be from a computer screen or from seeing – “The Mystery of the Lady in Red” – a mockumentary and work in progress installation on your daily walk as part of Last Friday’s Lockdown. You will see within the window carefully placed components to the piece – two moving image screens (one front-facing & layered with image, the other with text), a graffitied mirror, a hanging dress, an open case with material inside, shoes, a lightbulb, and a rotating figure head. If you walk past, glancing at the window may relapse you to become aware of how long you’ve been there – questioning, ‘Is my time up? What if people wonder what I am doing tonight? I am only a window shopper.’ Yet there is unexpected ambition to this, as the windows become the galleries of the street, there is a newly found accessibility to art for all that walk past and can’t help but to look in at the bright lights, moving parts and red punches of colour.

… And within this pause, you become aware that your public body, only allowed to be seen in part, is existing to act in performing right for an invisible discourse, which is how things should obviously be within this moment in time. Within this, you are confronted with an artwork which uses ‘symbolism, scale, proportion, colours, textures and volume’ to create a character known as the ‘Lady in Red’, who speaks ‘Cantonese and struggles to have a stable image” … who ‘wears a red wig, [and] sunglasses ‘reminiscent of HongKong gangster characters from the 90’s’ – a hybrid with both archetypal Hollywood and oriental characteristics. Through this, Hio shares similar feelings, in looking at her own reflection through both an elevation to find a ‘neutral image of a woman’ and a resistance to the idea of a homogenised identity to Chinese stereotypes, or Eurocentric / Westernised images.

In this work, although Hio’s cultural, national and gender constructs are the echoed discourses painted across this body surface – in light of both her own and this extension – the act of parodying images one can only see on the surface hands a sense of power to that moment of beholding. The repetition of collected images forces the viewer to try to recognise this frame as moment of clarity. Yet as the mirror prompts you to look back at yourself, what do you feel – empowerment, loss, confusion? In meshing influences of social pressure, a remembered inscription to confirm femininity through a male gaze, the influences of expectations on gender and where you are from, images from pop-culture and literature which populate this self-determined, neo-liberal encouragement… the porous nature of ‘Chinese’, ‘female’ identities across a surface to only be seen through a constrained time-period and lens, allows the artist to reclaim the power upon her own material body, by de-mystifying this discourse through a chaotic layering of images which forces the viewer to feel just like this ‘modern Chinese woman.’

This complex reminds me of the work of Gender theorist – Judith Butler. Take a read of this extract below from Bodies That Matter.

Is there a way to link the question of the materiality of the body to the performed activity of gender? And how does the category of ‘sex’ figure within such a relationship? Consider first that sexual difference is often invoked as an issue of material differences. Sexual difference, however, is never simply a function of material differences which are not in some way both marked and formed by discursive practices. Further, to claim that sexual differences are indissociable from discursive demarcations is not the same as claiming that discourse causes sexual difference. The category of ‘sex’, is, from the start, normative; it is what Foucalt has called a ‘regulatory ideal’. In this sense, then, ‘sex’ not only functions as a norm, but is part of a regulatory practice that produces the bodies it governs, that is, whose regulatory force is made clear as a kind of productive power, the power to produce – demarcate, circulate, differentiate – the bodies it controls.

But how, then, does the notion of gender performativity relate to this conception of materialization? In the first instance, performativity must be understood not as a singular or deliberate ‘act’, but, rather, as the reiterative and citational practice by which discourse produces the effects that it names… regulatory norms of ‘sex’ work in a performative fashion to constitute the materiality of bodies and, more specifically, to materialize the body’s sex, to materialize sexual difference in the service of the consolidation of the hetereosexual imperative. In this sense, what constitutes the fixity of the body, its contours, its movements, will be fully material, but materiality will be rethought as the effect of power, as power’s most productive effect. And there will be no way to understand ‘gender’ as a cultural construct which is imposed upon the surface of matter, understood either as ‘the body’ or its given sex. Rather, once ‘sex’ itself is understood either as ‘the body’ or its given sex. Rather, once ‘sex’ itself is understood in its normativity, the materiality of the body will not be thinkable apart from the materialization of that regulatory norm. “Sex, is, thus, not simply what one has, or a static description of what one is: it will be one of the norms by which the ‘one’ becomes viable at all, that which qualifies a body for life within the domain of cultural intelligibility. 1

Although Butler largely orbits her work around sexual-identities and orientations, Hio’s work inspires me to think of how gender performativity is used. Figured as a ‘reiterative’ and ‘citational’ practice from discourse, which supposedly constitutes the materialisation of the body’s sexual difference and material being – Hio’s work indeed is the instabilities, the possibility for re-materialisation which works to be turned against itself to ‘spawn re-articulations that call into question the hegemonic force of that very regulatory law.’ Hio says that the ‘material essence’ is ‘key’ through her sculptural sensibility, which from my observations, has the power to both debunk such ‘gendered’ tropes and images through performativity, and instead portray a multi-faceted and intersectional feminist portrait which presents an array of collected identities through object, text & image that rely uniquely on one another to explain the whole frame.

Although Hio talks of a melancholic awareness from literature she has read, which relates to cultural contexts and how different patriarchal societies have caused a ‘split’ which expect you to behave in certain ways, making you feel alienated or incomplete inside – this artistic experience helps the public world become this diaspora with Hio, forcing one to look past an exterior puzzle and reflect on the overt constraints… a cross-exchange which encourages a reflection on self-image in a newly materialised moment of artistic wholeness. Within this arguably postmodern culture, allowing the residues of many historical cultures to float above, never quite existing and never quite vanishing, as created artifacts from diverse cultures blend together into a seemingly contextless homogenised mass – we are able to claim a present through this artistic experience. It stares at us straight in the face just like this pandemic has upturned the world, and allows us to take agency in recognising the prejudices that are contained within… and spit them back out.

The work opened on Friday 24th April as part of Last Friday’s Lockdown, a reinvented window art programme to the monthly Last Friday’s Folkestone event. Find out how you can get involved by visiting & messaging the Last Fridays Facebook Page. Hio’s work is open until the 01 May (8-10pm daily). Come and see it for yourself.

Despite the current world situation, Hio has been able to deliver some really incredible work. What does this work evoke in you? We’d love your feedback.

The Mystery of the lady In RED

Despite the current world situation, Hio has been able to deliver some really incredible work. What does this work evoke in you? We’d love your feedback.